I’ve decided to bring a little more personality to londoncitycalling by sprinkling the blog with a few fun lifestyle articles and challenges me and my housemates take on. Living in a house share of 3 couples, this first challenge is one we’ve wanted to do for a while… the boyfriend make-up challenge! This is where the 3 guys will attempt to do their girlfriends make-up with absolutely no help from us.

Damian will be applying Emily’s (myself).

Henry will be applying Ellie’s.

Igor will be applying Ivy’s.

The first thing we did was combine all of our make-up. This is partly to intimidate them with the pure quantity of products, but mostly to see if they would be able to pick out the right shades for our individual skin tones.

We even shocked ourselves a little with how much we managed to pull together, and it certainly shocked the guys, with them spending the first 10 minutes riffling through our collection questioning the majority of the products. No boys, not every product that goes on your eyes is called mascara!

Straight away Henry manages to find the primer and realises this should be applied first, with both other boys following his lead. Good start.

Then comes the foundation. All three guys surprisingly managed to pick the correct foundation for their girlfriend. Despite using their fingers rather than a sponge, they’re all still going okay up to this point.

But then this is where it all starts to fall apart…

After already applying far too much foundation to start with, Damian then goes in for a second coat!

Damian: ‘Do you have to wait for the first coat of foundation to completely dry before you start on the second coat?’

Next Henry decides to try a little contouring, and he manages to put it in most of the right places.

For Igor a light coat of powder and blush – not bad.

But for Damian things take an even worse turn as he goes straight to the eye make-up. After a heavy handed brush of dark black eye shadow, a poor attempt at winged eyeliner (or ‘Amy Winehouse eyes’ as he called it) and a few disapproving looks, he then changes his mind and goes back to the blusher instead. This, however, does not go any better as he goes a little overboard.

Mascara was probably the biggest challenge for all 3 guys. Igor and Henry decided to avoid accidents by lightly brushing the tips of the lashes. Damian on the other hand goes in hard and decides mascara above and below the eyes is a great look!

Henry once again decides to test his abilities by blending Ellie’s eyeshadow from dark to light – look at that concentration. This idea didn’t go entirely to plan, but again top marks for trying! 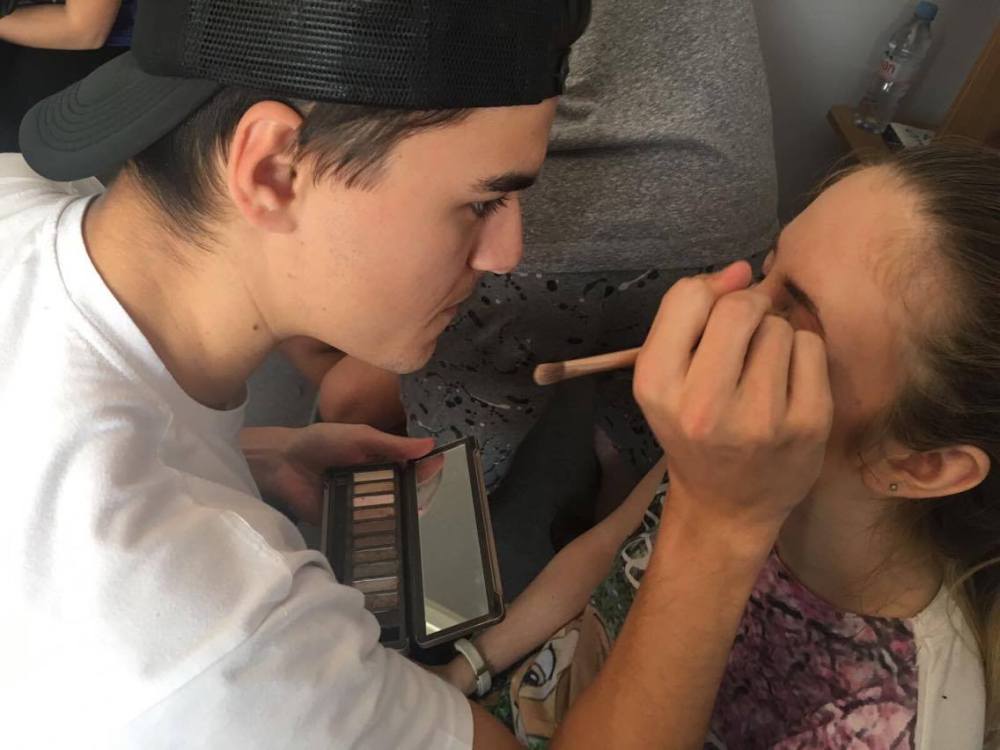 Lipstick was the final challenge for the boys. Worryingly, they appeared to enjoy picking the lipstick colours more than their girlfriends would have liked. Henry went for the slow but steady dab by dab method, whereas the other two managed it in a slightly swifter movement. I have to say, all 3 managed the lipstick surprisingly well. Have you done this before guys? 😉

So first let’s start with Ivy. I was very impressed with this one. Although Ivy wasn’t a fan, there was nothing too disastrously wrong. Dark smokey eyes and a cute, subtle shade of lipstick. Ivy could definitely go out in public like this without anyone taking a second glance.

Ellie’s make-up was a little more obvious with a lack of blending around the edges. Henry was definitely the most adventurous of the boys, trying out the most products but unfortunately his efforts didn’t entirely pay off. We all decided eventually that Ellie’s make-up looked a little bit like your 80 year old grandma.

And finally… Well what can I say about this? I’m not sure what’s worse; the thick orange foundation, florescent pink cartoon cheeks, bizarre badger eyes or the mascara EVERYWHERE!? Oh Damien, I feel like you just gave up trying. If this is what you want your girlfriend to look like then what can I say… You’re one lucky man! 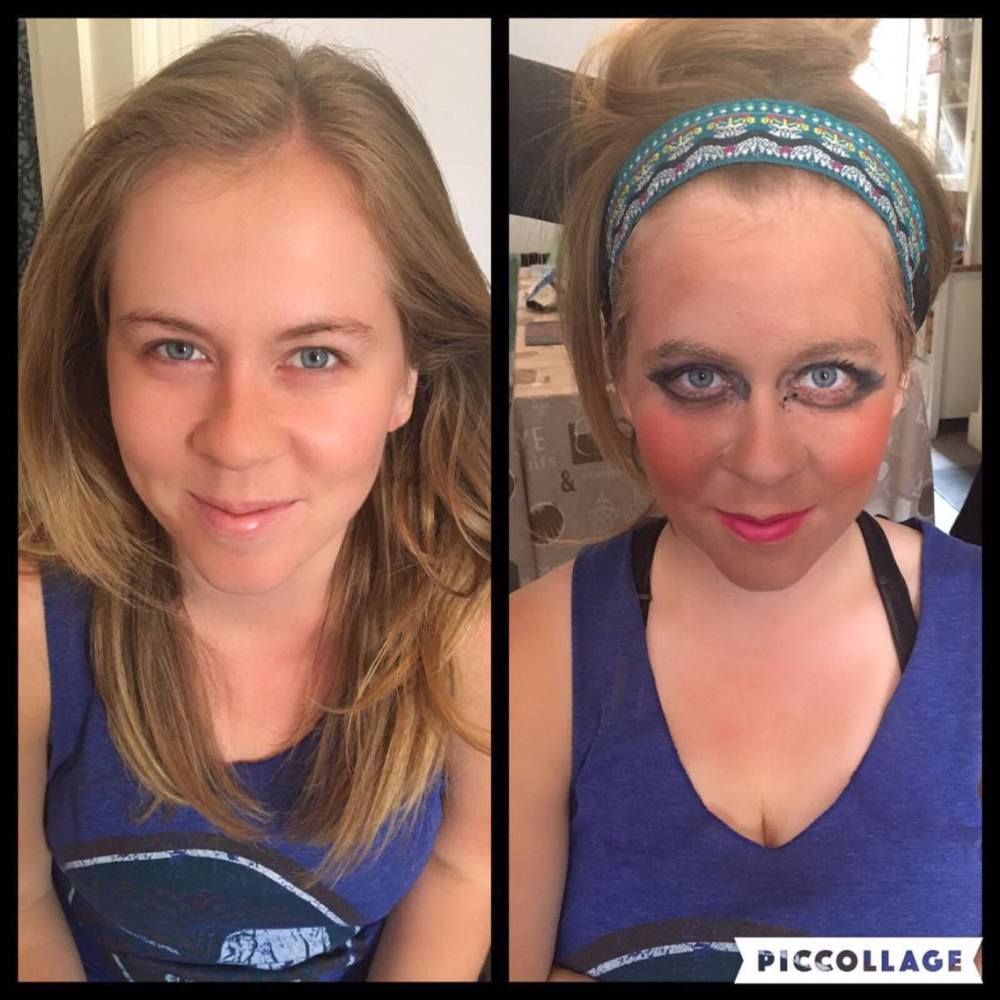 Whilst the make-up was already out and the camera rolling we decided to turn the tables and get some revenge! Unfortunately for us the boys seemed to very much enjoy this part.

Taking out some of the initial anger after seeing myself in the mirror!

We taught them how mascara should actually be applied. 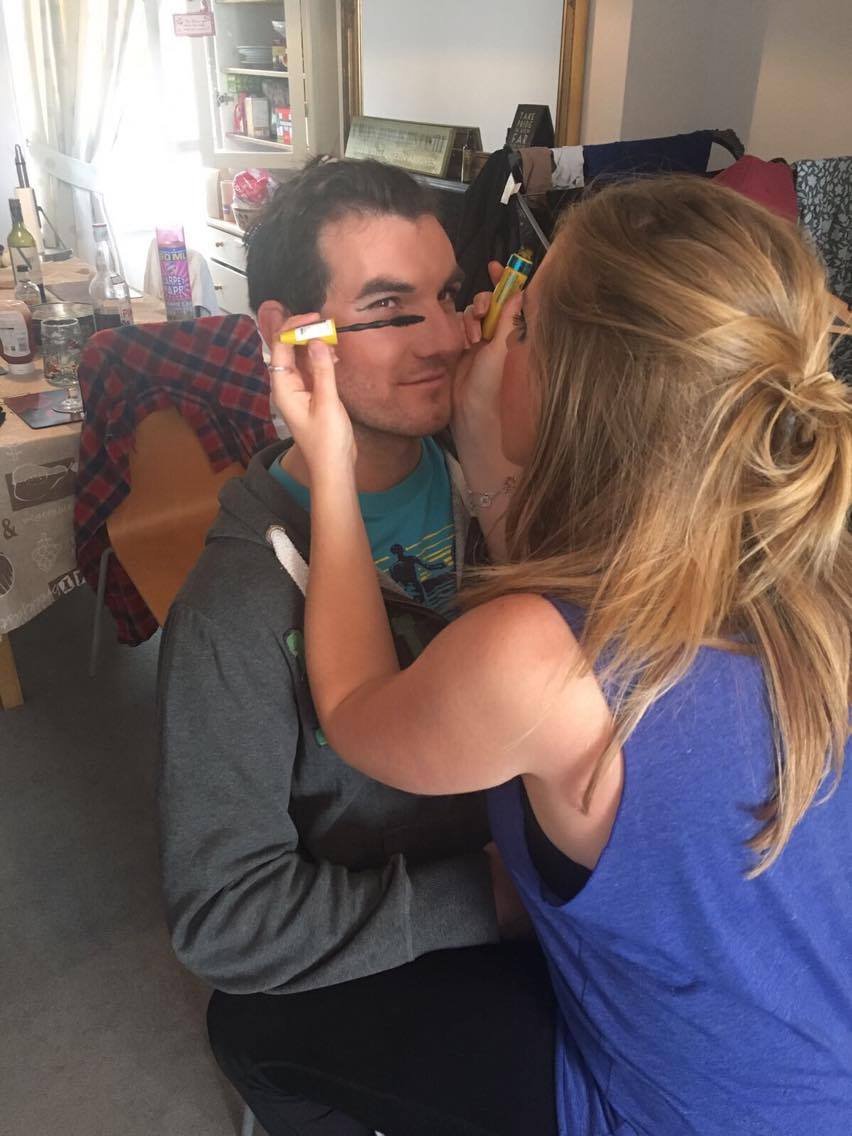 Igor was not a massive fan of things going near his eye and had to be pinned down in order for eyeliner to be applied.

Screaming like the little girl he was about to become!

Before and After – The Boys

After Ivy finally managed to get the eye make-up on Igor, she managed to do a pretty good job. Is it wrong to say he makes a better girl than he does a guy ? Just loose the facial hair! 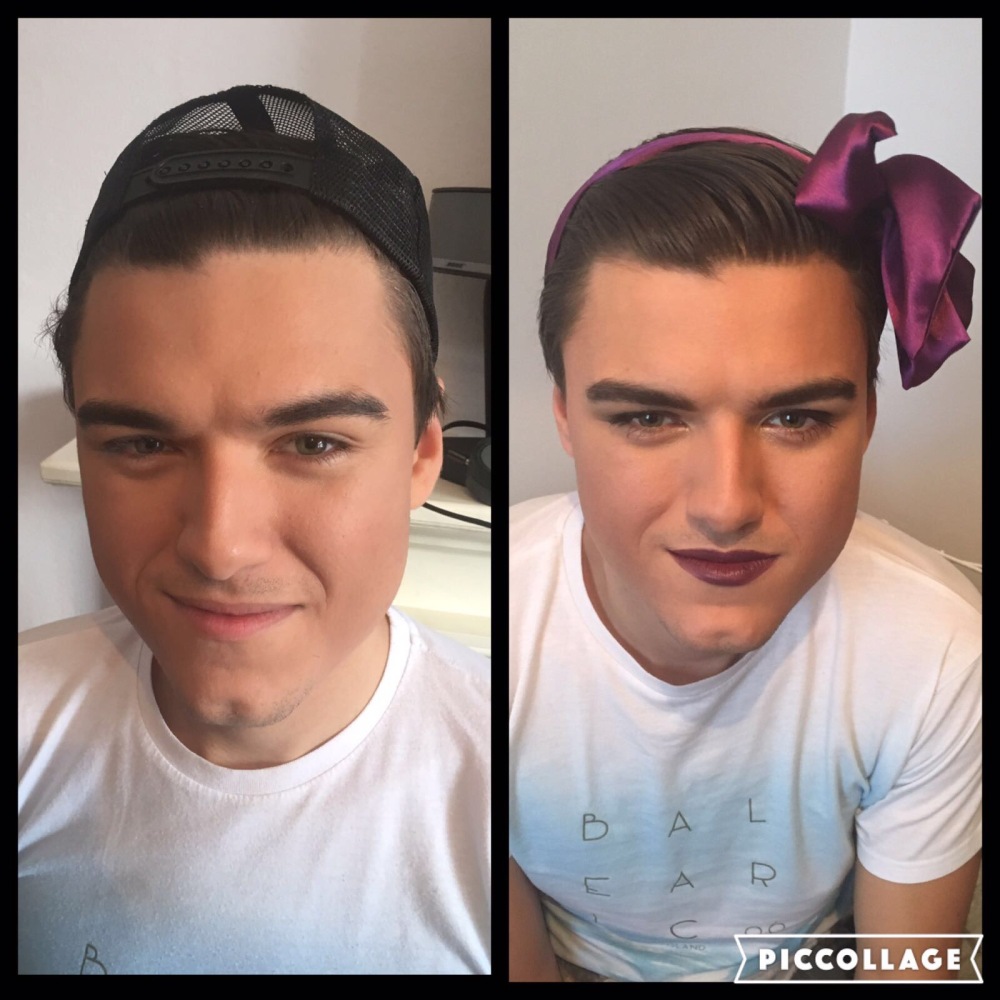 I went a little extreme on the contouring on Damian – but look at that nose!

The boys couldn’t be happier with their new looks! I’d be surprised if we don’t find them rummaging through our make-up bags before work next week.

We, on the other hand, couldn’t be happier to get ours off.

A process which for me took a lot of time and a lot of make-up remover!

Thanks for reading… Hope you enjoyed this challenge as much as we did and please post your photos if you’d decide to take on the challenge too!