Markets are one of my favourite things to do on a weekend in London. There’s so many to pick from, they always boast a variety of international food stalls and they’re a great place to grab a bargain. Yesterday I decided to try a market I’d never been to before and headed East to Old Spitalfields Market. Located in between Liverpool Street and Shoreditch High Street overground stations, or a short walk from Liverpool Street and Aldgate East tube stops, the market is a hidden treasure buried beneath the skyscrapers of the square mile. The whole market is covered which makes it a better option than others such as Camden on a rainy day, or if you are fortunate enough to go on a sunny day like I did, it’s nice to take a wander around that area of the city after you are done to take in the iconic buildings from below.

The market has a wide selection of stalls, from hot food and sweet treats to clothes, shoes, bags and artwork. The market also host special events such as an African market and a record market a couple of times a month, the dates of these can be found on the markets website.

One of my favourite stalls was the one pictured above. These vests were £4 each or 3 for £10. The vest below is the one I picked up (being a big fan of the TV series Once Upon a Time I couldn’t resist!). Surprisingly good quality and a good fit considering the price.

There were many gorgeous women’s scarfs ranging between £5-£10 and dresses from £10-£20. There was also a stall which made personalised converse which I loved but unfortunately could not photograph. There were lots of mens stalls too, in particular some amazing shoes, belts, ties and cufflinks which my boyfriend couldn’t get enough of.

Jewellery stalls were in particular abundance. The necklaces in the picture below were my favourite find of the day, they had little dolls as pendants and each one was unique. There was also a stall with lego people designed to look like celebrities and famous characters which could be turned into necklaces and cufflinks (or simply put in a display box). The designer can also make personalised ones if you give her a photo of yourself or someone you know. If you’re looking for a quirky gift for a friend or relative I’d definitely recommend checking these stalls out. 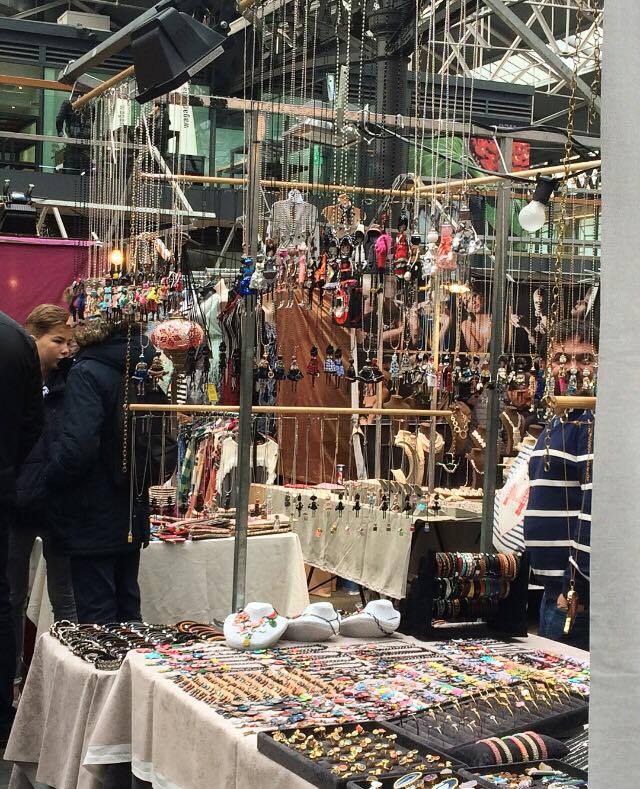 I got the cute little moustache ring pictured below for the bargain price of £1. Might not last too long but for a quid why not give it a try?

The quantity of food stalls may not have been quite on par with some of London’s other markets, but the quality was definitely above average. Hot food ranged between £3 – £10 so not too expensive, and the portion sizes were very generous. We opted for a £5 naan chicken wrap which we halved yet still filled me up. Later we then tried some £3 chicken dumplings with sweet chilli sauce and for dessert some very tasty French Macarons. I chose to picture the stall below as the bagels were being toasted using a blow torch which I though was pretty cool.

As well as the hot cooked food, there were a variety of other food stalls selling things such as olives, turkish delight, french pastries and cakes to name just a few.

Old Spitalfields is also home to a few restaurants, other than the market stalls, that you may be more familiar with such as Giraffe and Las Iguanas, as well as some pretty little wine bars with outdoor seating such as the one pictured below.

The market has enough to keep you occupied for a good couple of hours, and with the food stalls and bars you can easily spend a whole afternoon here. I will definitely be returning!